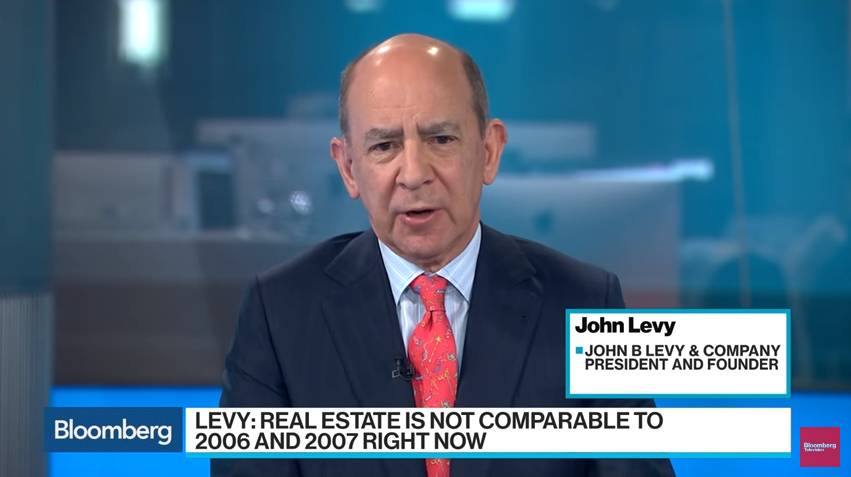 John B. Levy Discusses Impact of Technology on Commercial Real Estate During Appearance on Bloomberg Surveillance

John Levy, president and founder of John B. Levy & Company, appeared on Bloomberg Surveillance live from their London studio, discussing the impact of technology on housing and outlook for the real estate market.Speaking with hosts Tom Keene and Francine Lacqua, Levy eased concerns that commercial real estate was as highly leveraged as it was a decade ago.“There’s nowhere near the leverage that we had in 2006 and 2007, and I guess the answer is ‘thank goodness,’” Levy said, adding that there was, however, a lot of investors looking to enter the commercial real estate market either on the equity side or the debt side.

“There’s a huge growth in what we call debt funds, which are non-bank banks which are interested in lending money to real estate, thinking they can get equity-like returns with debt-like securities,” said Levy. “But this is really not comparable to 2006 and 2007.”Levy also addressed questions from host Tom Keene on the continued growth of eCommerce, including internet retail giant Amazon.“As people build their backbones, and we get gigabytes of data, it’s going to be much easier to shop online as it is now, and it’s pretty east to do it now,” Levy said, suggesting that such hot growth will be a line that continues to “keep going up.”

Regarding Amazon itself, Levy said that that the topic of eCommerce growth “does bring into account the discussion that we’re having in the U.S. which is a big discussion on Amazon 2, or HQ2 – their new headquarters – and there is a real food fight going on for that real estate.”Host Francine Lacqua asked Levy if he expected to see more of those kinds of real estate deals, such as JP Morgan building “big real estate” in New York.Levy suggested that a need for a “re-do” of aging buildings in Manhattan would continue to drive construction in that market.“The JP Morgan building is just huge, and of course, that was a building built the 1950’s”, said Levy. ”So it’s really outdated, and if you look at all of the real estate around Grand Central, what you see is a lot of infrastructure that’s 50, 60 years old.”“So I think there will be more of that, but there will also be more governments looking to help with inducements and tax credits,” concluded Levy.

See below to watch highlights of Levy’s March 16 appearance on Bloomberg Surveillance, and for other video replays, visit jblevyco.com/category/video/.